This article is also available in:
This is one of the differentials of Contele Tracker, even in Dead Zone, the tracker stores the data and as soon as it reenters a coverage area , it automatically sends them to our server.A frequent question we get here is:>_If my vehicle enters a region where there is no signal, what happens to the tracker in a Dead Zone?_ Contrary to what many people think, we also have many dark areas in big cities.On the roads further away from big cities, the problem is even more serious.Before answering this question, let's quickly understand how a GPS/GSM vehicle tracking system works.What is a Dead Zone?These are areas with weak signals due to the presence of obstacles that affect the module's communication with the antenna.Examples: tunnel, parking lots, metal roofs, and distant areas of the city.How does a GPS/GSM vehicle tracking system work

The tracker module installed in the Vehicle communicates with the satellite, captures the coordinates, and sends information about the location and speed of the points to our system via the mobile internet (GPRS).GPS: Global Positioning System, is a satellite positioning systemGSM: Global System for Mobile is the world's most popular standard mobile technology for cell phones.GPRS: First generation of data in mobile telephony to date used in credit card machines.In places where there is no cell signal, no system will show the Vehicle online on the map, as the tracker will not be able to transmit the coordinates over the mobile internet.How does Tracker Conte work in Dead Zone?Contele Tracer works with Datalogger . Datalogger: Also known as data logger, it is a tool that automatically records data collected by a particular device.This memory stores 65,535 points with records of position, time, speed, stop points, and ignition status.Datalogger memory (storage) is not erased even if the tracker module is turned off!Thus, when accessing the system to analyze the routes that your vehicle has taken, you will not even know that it passed through a shaded area.As an example, I decided to do a practice test in a region with a shadow area. See in the image below, an area with few antennas and no cell coverage: Our equipment went through this area and stored everything, you can see that the route was built perfectly, see the image below. 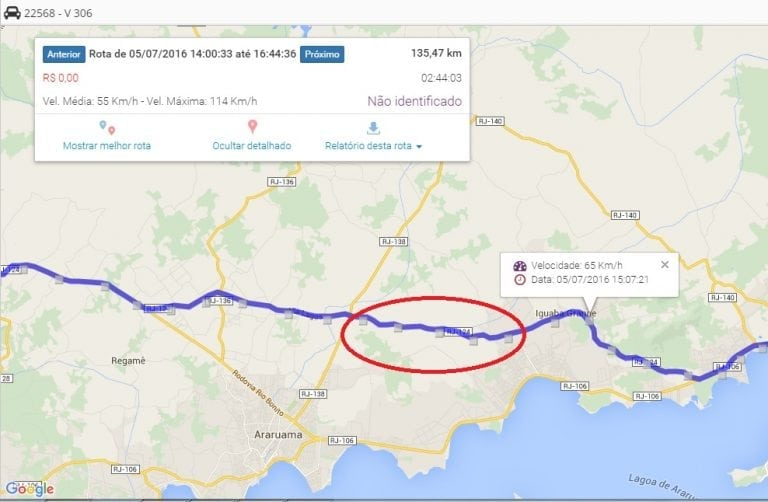 If we didn't have the Datalogger feature, the route would be a straight line, connecting the last point with a signal, to the next point where the signal returned.This problem would also affect the calculation of distances and speeds.In Brazil, operators say they cover between 91% and 93% of the areas where there is population.You will hardly linger without knowing your vehicle's online position.The Dead Zones are small, but they are many and can destroy your routes and reports if the system used does not have the Datalogger.Did this content resolve your question or help you?Vote below and, if you didn't find what you were looking for, send a message in the chat beside.

Was this article helpful?